US election 2020: Obama calls for end to voter suppression

Former US President Barack Obama has sharply criticised what he described as Republican attempts at voter suppression in a speech at civil rights leader John Lewis’s funeral.

He said people in power were “attacking our voting rights with surgical precision” and called for wide reform.

He also decried the police killing of George Floyd and the subsequent use of federal agents against protesters.

He was one of the “Big Six” civil rights leaders, which included Martin Luther King Jr, and helped organise the historic 1963 March on Washington.

In a fiery eulogy delivered in Ebeneezer Baptist Church in the city of Atlanta, Mr Obama, a Democrat, launched a stinging attack on Republican President Donald Trump’s administration and some police departments.

“Today we witness with our own eyes, police officers kneeling on the necks of black Americans,” he said. “We can witness our federal government sending agents to use tear gas and batons against peaceful demonstrators.”

He said people > bm in government were “doing their darnedest to discourage people from voting” by closing polling stations and imposing “restrictive ID laws” on minorities and students. 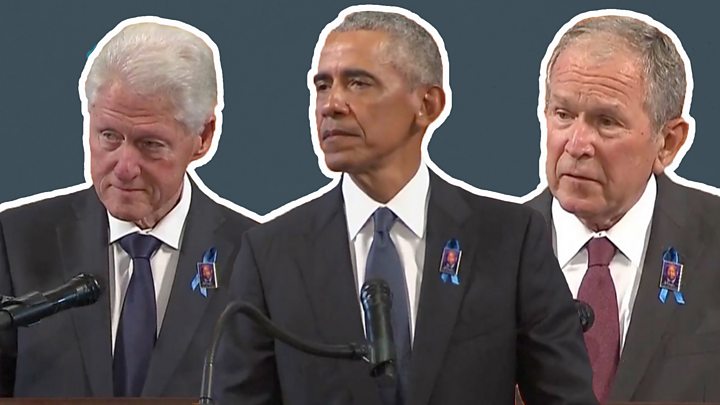 Mr Obama singled out the role of the US postal service in delivering postal votes amid the coronavirus pandemic. Earlier on Thursday Mr Trump suggested the 2020 presidential election in November should be delayed because he said – without providing evidence – that postal voting would enable large-scale voter fraud.

Mr Obama also proposed a series of reforms to voting in the US, including:

He also called for people in Washington DC and Puerto Rico to have the same representation as other Americans, a long-cherished ambition of Democrats.

And he called for an end to the filibuster – which requires 60 votes to pass legislation instead of a simple majority of 51. He described it as a “Jim Crow relic”. Jim Crow laws enforced racial segregation in southern states until 1965 and were used to disenfranchise black people.

“If all this takes eliminating the filibuster, another Jim Crow relic, in order to secure the God-given rights of every American, then that’s what we should do,” he said.

Obama sharpens rhetoric ahead of election

With less than 100 days until November’s presidential election, Barack Obama is sharpening his political rhetoric.

While he hasn’t hesitated to offer veiled criticisms of Donald Trump in the past – in May he said the coronavirus had “finally torn back the curtain on the idea that so many of the folks in charge know what they’re doing” – his eulogy for John Lewis was perhaps his most pointed political speech since the 2018 congressional mid-term elections.

He drew a line from the segregationist politics of Alabama Governor George Wallace in the 1960s to the “attacks on democracy and what’s best in America that we’re seeing circulate right now”.

Some of what Mr Obama said was new. Some was a reprisal of previously announced positions. The former president, however, framed all of it in terms of an ongoing struggle for a “fuller, fairer, better America”.

For three and a half years, Mr Trump has made a concerted effort to dismantle Mr Obama’s presidential legacy – on healthcare, immigration, climate, foreign policy and more.

Mr Obama’s attitude on Thursday suggests he knows he has just a few months to help deny his successor another four years to finish the job.

Paying tribute to Lewis, Mr Obama said he had become the first black US president because of the congressman’s fight for civil rights for black Americans.

Lewis, also a Democrat, did “everything he could to preserve this democracy and as long as we have breath in our bodies, we have to continue his cause,” Mr Obama said.

Mr Bush, a Republican, said he had his “differences” with the late congressman, but “we live in a better and nobler country today because of John Lewis”.

During the civil rights movement, Lewis was one of the founders of the Student Nonviolent Coordinating Committee (SNCC), and then became its chairman from 1963 to 1966.

He co-organised and spoke at the March on Washington for Jobs and Freedom, the rally at which Dr King delivered his historic I Have a Dream speech. Lewis was the last surviving speaker from the march. – bbc.com

This site uses Akismet to reduce spam. Learn how your comment data is processed.

Prev Next 1 of 26
Sponsored Links
You cannot print contents of this website.